Well, Thanksgiving is here. How is the turkey doing? WHAT? The oven’s not working?

Now, that is a nightmare scenario no family wants to be faced with.

There aren’t many moving parts in your average oven, whether it’s gas or electric. But when things do go wrong, they can stop dinner time in its tracks.

The controls on modern ovens can be quite complicated and daunting for many users but, if one can take 30 minutes to sit down with a cup of coffee and read through the basic instructions in the owner’s manual, you be surprised how easy oven life can be.

So, what can be holding that turkey to ransom?

Fill out my online form.

1) OVEN WON’T TURN ON
a) Ovens should be on their own electrical circuit. The first thing to check should be the power. If there is none, check the circuit breaker to see if it has tripped. If it has, be aware that there is probably an underlying reason for it to have tripped so, if you reset it, it may trip again. Often, the trip might be caused by a heater element failing,
b) If there are lights on but the oven won’t turn on, it may be because the controls have been set somehow that conflicts with what you’re trying to do. Is there some kind of timer or delay that has been set accidentally? Check the user guide to ensure the settings are correct. Sometimes turning off the power at the outlet can reset things.
c) There could be a broken wire or damaged element.
BE AWARE THAT WORKING ON ELECTRIC OVENS CARRIES THE RISK OF ELECTRIC SHOCK. YOU MUST ISOLATE THE OVEN FROM THE POWER SOURCE BEFORE ATTEMPTING TO WORK ON IT, OR CALL AN EXPERIENCED TECHNICIAN.
2) OVEN WON’T HEAT
a. With gas ovens, if there is gas coming to the oven, then this is often because of a faulty igniter. If you’re able, you can fit a new igniter yourself, or call a technician,
b. With gas ovens, if there is no gas coming to the oven, then there is probably a fault with the gas line. This would require a qualified gas technician to inspect and rectify.
c. In an electric oven, this could be caused by a failed heater element. These elements can sometimes be difficult to get to and may need a technician familiar with the model. Others are fairly straightforward to replace by someone who’s handy.
BE SURE TO ISOLATE (DISCONNECT) THE OVEN FROM THE ELECTRICAL CIRCUIT BE ATTEMPTING ANY INVESTIGATION OR REPAIR. 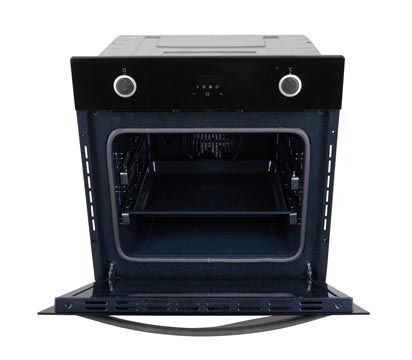 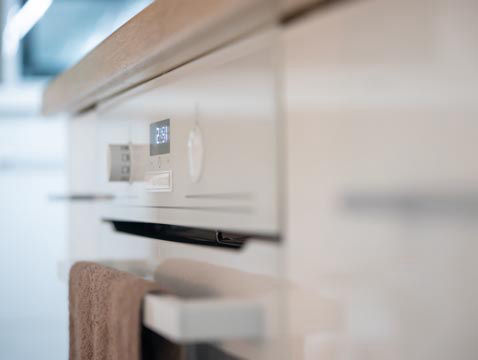 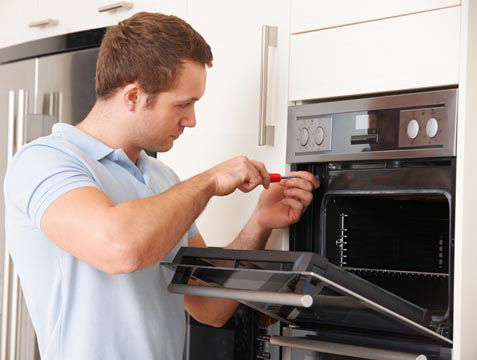 3). OVEN DOESN’T REACH THE CORRECT TEMPERATURE
a) As long as the elements are working (electric oven) or the igniter is working (gas oven) then the problem could be with the thermostat (temperature sensor). You can check to see if the sensor is touching the wall of the oven. It should not touch it.
b) You can check the temperature inside the oven with an oven thermometer to verify your suspicions.
c) In the owner’s manual, you should be able to find instructions about how to recalibrate your oven. This would be a good step prior to calling a technician.
d) This could be a problem with the temperature sensor, the gas igniter or the heating element.

4) OVEN DOOR WON’T CLOSE
IT IS DANGEROUS TO USE AN OVEN WITH A DOOR THAT DOESN’T CLOSE FULLY.
a) Check to see if there is an obvious obstruction.
b) If the door has been removed for cleaning etc., check to ensure that it has been refitted correctly.
c) If it’s neither of the above, then very often the cause is a failing door spring/hinge. These can be purchased and fitted yourself if you are inclined. Sometimes, they can be tricky. Call us if you’re not confident about tackling it.

5) OVEN DOOR WON’T OPEN
If the oven door is locked after a self-cleaning cycle, the solution can vary depending on the model of your oven. Some ovens have a lever to lock the door, others have an internal electronic lock that you cannot physically unlock. You basically have two options before having to call a technician.
a) Turn off the oven and unplug it from the power source to reboot/reset the system.
b) Re-run a short self-cleaning cycle, cancel it after about 10 – 15 minutes and wait for it to cool to see it if clears the locking mechanism.

6) OVEN’S SELF CLEAN CYCLE WON’T START
a) Check the owner’s manual to ensure you have set the controls correctly.
b) Make sure the door is closed properly because the cycle won’t begin until it is.
c) If you’re still having problems then there could be an electronic fault with the door lock mechanism which will require a technician to repair.

7) THE OVEN LIGHT DOESN’T WORK
a. Oven bulbs fail from time to time and they are fairly straightforward to replace. Instructions for your particular model will be in the owner’s manual.

This is not a complete list of all the things that can require a repair on ovens but if what you’re looking for is not covered, please give us a call for help or advice. Frederick Appliance Repairs on (301) 683-5959